This beautiful new trail began with a journey that started more than 130 years ago, when the Ponca Tribe was forcibly relocated from the confluence of the Niobrara and Missouri rivers to Oklahoma in 1877. The tribe’s relocation became a return when Chief Standing Bear braved the biting cold of winter storms to return the body of his dead son, Bear Shield, to be buried in his Nebraska homeland. Once in Nebraska, Chief Standing Bear was captured by General Crook, triggering a historic court case where Standing Bear was declared a person before the law.

The journey and court case continue to resonate to this day, with efforts underway to gain passage of federal legislation to declare the Ponca relocation route as a National Historic Trail. This trail, if officially recognized, would be largely a virtual trail interspersed with significant landmarks starting with stunning cliffs of the Niobrara river, the burial site of White Buffalo Girl in Neligh, Neb., Prairie Flower near Ruby, Neb., and then south through the Flint Hills of Kansas to Oklahoma. 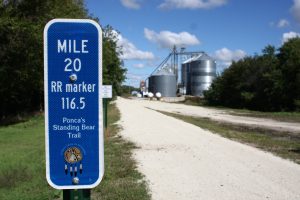 A physical portion of the trail route running southward 20 miles from Beatrice to the Kansas border has been developed by the non-profit group, Nebraska Trails Foundation, as a hiker/biker trail and will soon be handed over for ownership to the Ponca Tribe of Nebraska, a reversal of the history of tribal lands being taken away from the tribes.

“The trail itself is a reminder of a tragic time in our tribe’s past, a past that still resonates with us today,” Ponca Tribal Chairman Larry Wright Jr. said. “However, in spite of that past, our tribe is thriving today and looks toward a future that honors our ancestors and provides hope for our youth.” 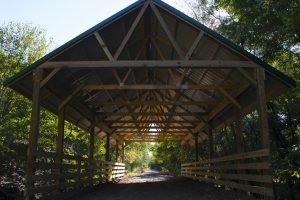 The trail, which will be managed by the Homestead Trail Conservation and Trails Foundation, runs roughly parallel to the east side of the Blue River through generally flat fields interspersed with sections of canopied trees and across numerous small bridges.

Some finish work remains, but the trail is open and very rideable with several picnic shelters, informational kiosks and restrooms along the route. Reviews have been very positive as evidenced by this trail rider’s comments:

“Rode this trail from Beatrice to Marysville, KS. We enjoyed the wildflowers, birds, and other wildlife that crossed our path. We saw deer, snakes, and toads. Plus lots of birds including: red-tailed hawks, bluebirds, cardinals, orioles, turkey vultures, goldfinches, and an owl (just to name a few).”