After being forced into Indian Territory by the U.S. government, the Ponca tribe set out for present-day Oklahoma. This map follows the trail taken by Chief Standing Bear when he led his tribe back to the new territory assigned for the Poncas. This maps aims to create a visual representation of the long trail the Poncas had to travel by foot. Along the hundreds of miles they have to walk, the tribe underwent all sort of difficulties, including weather inclemencies and lost over 100 members of the tribe, including Standing Bear’s son: Bear Shield. After arriving to a land that was not fit for the Ponca lifestyle, Standing Bear decided to return back to their homeland together with a small commitive, in order to bury his son. Upon his arrival to the Omaha reservation, Standing Bear was arrested and judged, beginning one of the most important cases for the legal status of Native American people and setting an example for the widespread application of Human Rights all over the country.

This map shows the route taken by the Ponca when they were forcibly removed from their ancestral lands to a new location in Indian Territory (present-day Oklahoma). Indian Agent Edwin A. Howard’s journal provides an overview of events along the route. The journey was marked by tragedy in the form of terrible weather, illness, and many deaths.

The story of Chief Standing Bear results from this removal and his son’s dying wish to be buried among his ancestors back along the Niobrara River.

The points on the map are color-coded to represent specific events. Orange dots represent important locations, such as reservations and the District Court where Standing Bear’s trial took place. Red dots represent deaths that occurred on the journey to Indian Territory. White dots represent the formal burials that were carried out for Prairie Flower and White Buffalo Girl. Blue dots represent journal entries from Agent E.A. Howard along the trail. 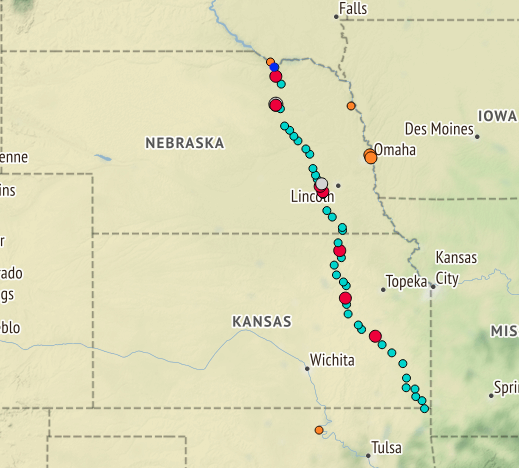 Nebraska and Kansas newspaper comments on passage of Ponca through towns.

An account of the first group of Ponca passing through Columbus, NE on their way to Indian Territory.

An account of the first group of Ponca passing through Seward on their way to Indian Territory.

An account of the first group of Ponca passing through Neligh, NE.

The first group of Ponca’s passage through Columbus, NE.

The first group of Ponca pass through the towns of Crete, Wilber, and DeWitt.

Passage of the Ponca through Emporia, KS.

Passage of the Ponca through Emporia; commentary about Emporia Ledger’s report.

Passage of the Ponca through Iola, KS.

Passage of the Ponca through Manhattan, KS.

Arrival of Ponca tribe at the Quapaw’s Reservation.

This is an approximate location of the Ponca Village. The Ponca tribe lived around the Niobrara river when the Europeans arrived to the United States, their origin though, may be on the southeastern part of North America. They Signed their first treaty with the American Government in 1817. In 1868, as a consequence of the Fort Laramie treaty, the government included the Ponca lands inside the Great Sioux Reservation, creating a conflict between tribes and causing the forceful removal of the Ponca to Indian Territory. Nowadays there exist two Ponca tribes, one in Nebraska and one in Oklahoma, which is a consequence of their removal to Indian territory in 1877

The Indian Agencies were the official intermediary between the U.S government and the Native American tribes. The indian agents were appointed by the Bureau of Indian Affairs. Different Indian Agencies were established throughout the country with their corresponding agent. Agent E.A. Howard was the responsible agent at the time of the removal of the Ponca to Oklahoma. The entries of his diary allow us to trace the long and harsh journey that the Poncas had to complete.

The death of White Buffalo girl was one of the first casualties of the forced removal of the Poncas, a tribe that were always friendly to the new European Settlers. More information on this Net production.

Several members of the tribe perished during the march to Indian territory. The distance to cover on foot was approximate of 600 mile and such a physical effort and the exposure to the elements were the cause of many deaths, including Prairie Flower, daughter of Standing Bear, who died of consumption at 2 P.M. on June 5, 1877. She was buried the next day at the cemetery just outside the town of Milford, NE.

Fort Omaha was a supply a fort, this is the location where Standing Bear and 29 other Ponca were taken and held by the U. S. Army after leaving Indian Territory in 1879.

The trial was held in the U.S. Post Office and Customs House located at the SW corner of 15th and Dodge Streets from May 1 – May 2, 1879. Judge Elmer Dundy delivered his verdict ten days later on May 12, 1879, ruling that Native Americans were people in the eyes of the law.