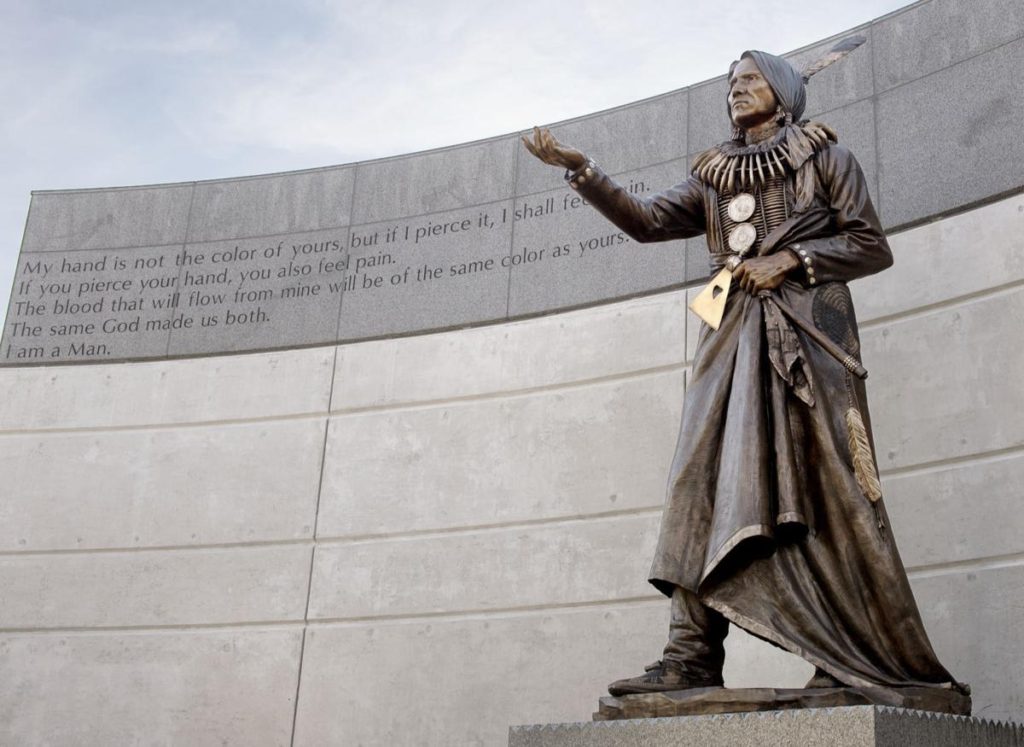 Sculptor Ben Victor set the bar high for himself.

He wanted his sculpture of Standing Bear, the Ponca chief whose 1879 trial established that Natives are “persons within the meaning of the law” to be at the level of Daniel Chester French’s “Standing Lincoln,” the iconic figurative sculpture on the west side of the Nebraska State Capitol.

Making the bronze of Standing Bear 11 feet tall from its base to the tip of the feather atop his head, Victor matched the dimensions of “Standing Lincoln.” Backing the figure with a wall, in this case, long and curved, he paired up the presentation of the sculptures.

And, with its emotionally resonant, highly detailed depiction of Standing Bear, Victor evokes the quality of the man cast in bronze in much the same manner as did French more than a century ago.

French’s sculpture, dated 1912, was commissioned by the state of Nebraska to celebrate the centennial of the president who gave the Capital City its name.

Victor’s sculpture, which he began last year and finished this fall, was commissioned by the Nebraska Commission on Indian Affairs and Lincoln native Donald Campbell, whose foundation provided the sculpture as a gift.

Located on Centennial Mall between Q and R streets, directly west of Andersen Hall, the home of the University of Nebraska-Lincoln’s College of Journalism and Mass Communications, the Standing Bear sculpture is, just two weeks after its installation, an iconic piece among Lincoln’s impressive array of large, outdoor sculpture.

That status starts with its larger-than-life scale and its placement on a base that allows the figure to tower over the mall plaza — making it connect from a distance (as seen from the west) and fully engage the viewer from up close.

Impressively crafted, the sculpture utilizes buffing and material to create different shades in the bronze, near gold for the metal in the axe and the medallions around his neck, dark for the clothing and hair and a classic bronze tone for the face and hands.

The details in the piece are exquisite — the beadwork on his hips, moccasins and neckpiece; the writing on the medallions; the pieces in the fathers; and, especially the lines and ridges in his hands and face that make the figure become, so to speak, Standing Bear.

With his right hand extended palm up and a stoic look on his face, the sculpture conveys, as Victor desired, the determination, dignity and courage of the chief who defied federal orders in returning to his tribal homeland in Nebraska from Oklahoma and was arrested for it.

Inscribed on the wall behind the sculpture is a version of Standing Bear’s famous statement from the trial: “This hand is not the color of yours, but if I pierce it, I shall feel pain. If you pierce your hand, you also feel pain. The blood that will flow from mine will be of the same color as yours. The same God made us both. I am a Man.”

That still evocative statement completes the conveyance of not only who Standing Bear was but why he is represented in the monumental sculpture.

When Victor brought the clay maquette of the sculpture from his Boise, Idaho, studio to Lincoln in March, he told me he couldn’t believe that Standing Bear wasn’t represented in the U.S. Capitol’s National Statuary Hall.

That’s testimony of Standing Bear’s importance from the artist, who has two sculptures in the hall, including one of Native activist Sarah Winnemucca.

Standing Bear may never make it to National Statuary Hall. But he will, for years, be represented in the center of Lincoln by Victor’s superb sculpture, which is destined to become a local landmark.

A final note: I’ve deliberately not used the word ‘statue’ in this piece, even though Victor’s work could be classified as such.

That’s because, since the 1950s, figurative sculpture, in Victor’s word “lost the aesthetic in favor of subject matter,” creating a host of bad statuary — of which Lincoln has more than its share.

The aesthetic in accurate representation and its intent to convey something about the person beyond mere replication has, of late begun to return to figurative sculpture, resulting in works of art not simply statues.

Standing Bear is a perfect example of a figurative sculpture that is a work of art.