Ponca Tribe will soon own piece of land that’s part of ‘Trail of Tears,’ name it after Chief Standing Bear 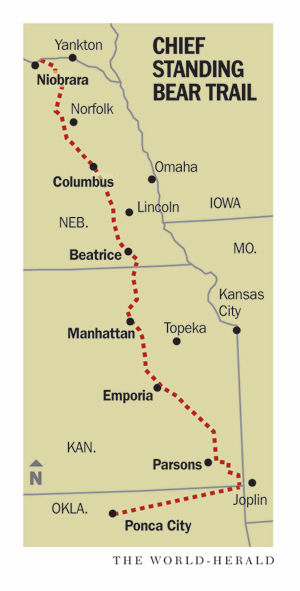 LINCOLN — The Ponca Tribe of Nebraska will soon take ownership of a ribbon of land that is tightly braided into the tribe’s ancestral and cultural identity.

During a ceremony Sunday at their offices in Lincoln, tribal leaders signed an agreement to accept 19½ miles of a former railroad right of way between Beatrice and the Kansas border in southeast Nebraska. The land holds special significance because it traces part of the path walked by the Ponca in 1877, when the U.S. Army forced 500 men, women and children to march 500 miles to a reservation in Oklahoma.

Read the rest of the article at Omaha.com.